Trif Alatzas was named Publisher and Editor-in-Chief of The Baltimore Sun Media Group in March 2016. The award-winning reporter and editor is a Baltimore native who began his career as an intern at The Evening Sun while a student at Loyola University Maryland. After working at newspapers in New York and Delaware, he returned to The Baltimore Sun in 2002 and has since held several roles including Executive Editor/Senior Vice President, Head of Digital Media, Sports Editor and Business Editor. He oversees the business staff and journalists at The Baltimore Sun, The Baltimore Sun Media Group’s web sites, two other daily newspapers at The Carroll County Times and the Annapolis Capital as well as more than two dozen of the company’s community newspapers and magazines.

Trif led The Sun’s newsrooms through the company’s successful transition to paid digital subscriptions in 2011. He is credited with bridging the print and online divisions of the newsroom and ensuring The Sun’s journalists have an array of skills to maneuver between digital and print platforms seamlessly. He also developed and drove the editorial strategy in BSMG’s 2014 acquisitions of The Annapolis Capital and Carroll County Times. In 2014, he formed The Sun’s investigative reporting team.

Under his leadership, The Sun and its journalists have continued the tradition of exceptional and award-winning journalism in Baltimore. The newsroom was recognized during the past three years with more than 40 national awards for work including investigative journalism, online reporting and design, commentary as well as breaking news coverage. The Sun has been named a finalist for the Pulitzer Prize three times during the past three years for breaking news, editorial writing and editorial cartoons. The news organization’s coverage of the Baltimore riots and the aftermath was recognized with two awards from the Online News Association in 2015 for breaking news and explanatory reporting. Other breaking news awards include the National Headliner Award each of the past two years as well as recognition by the Investigative Reporters and Editors organization and the American Society of Newspaper Editors. The Sun also has been named News Organization of the Year the past eight years by the Maryland-Delaware-D.C. Press Association. The Carroll County Times and The Aegis received similar recognition in 2016. The Sun’s “extraordinary efforts” to gain access to public records and to hold local officials accountable was recognized the past three years with the prestigious James S. Keat Freedom of Information Award. 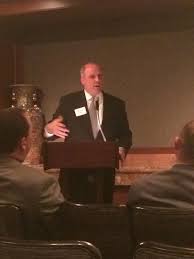 Trif served as a Pulitzer Prize juror in 2015 and 2016 at Columbia University. He also is chairman of the state press association’s Freedom of Information Act/Public Information Act subcommittee and is a member of the American Society of Newspaper Editors’ First Amendment committee. He was named one of Maryland’s most influential people in 2016 by the Daily Record legal newspaper. He currently serves on the board of visitors for the University of Maryland’s Philip Merrill College of Journalism and the University of Maryland, Baltimore County as well as the board of directors for the Greater Baltimore Committee and the Downtown Partnership of Baltimore.

Trif also has led The Sun through various partnerships during the past several years including reporting fellowships and grants with Marquette University, the Solutions Based Journalism association and the University of Southern California’s Annenberg School of Journalism. The Sun also has partnered with the University of Baltimore for political polling and primary debates. The Sun and CNN also teamed up in 2016 to produce a television documentary about Baltimore and the case of Freddie Gray’s death. Trif was the keynote speaker for the 2016 O’Brien Fellowship in Public Service Journalism conference at Marquette and the 2017 Clarence J. Caulfield Memorial Lecture at Loyola University Maryland.

Trif received a master’s degree in public affairs reporting from the University of Illinois at Springfield and a bachelor’s degree in communications from Loyola University Maryland. He also has worked for news organizations in Springfield, Ill., Rochester, N.Y. and Wilmington, Del.